Editor’s note: Existing in stark contrast to the powder pink sand beaches that line Eleuthera are jagged honeycomb rocks that waterfall in to the Atlantic Ocean and the Great Bahama Bank – two bodies of water recognized for their equally stark contrast in colour. At times seen hanging above such waters, by the tips of his fingers, is rock climber Chris Brown. Here the adventure seeker shares his Eleuthera experience and guides us to the best rock climbing spots dotting the 110 mile long landscape…

Long ago, as a fledgling climber moonlighting as a surfer in Florida, a friend and mentor of mine would tell stories of mystical waves pounding the shores of a remote Bahamian island. “Eleuthera,” he would say, “The place gets really good surf, and there’s no one around but you and your buddies.” This was in the days before the internet and smart phones, when information was much more difficult to gather. Dispersal of knowledge was more traditional – story telling around campfires and gatherings.  As the years progressed, and technology with it, I started uncovering more tidbits and details about the waves in Eleuthera.  An objective unrelated to surfing kept showing itself in all of the Eleuthera information – large cliffs. Fast forward in time, and I had the means to seek out Eleuthera’s fabled surf and potential climbing. Armed with a sailing vessel, 3 surfboards, 2 pairs of climbing shoes, and ridiculous modern gadgets that could tell me where I was in the middle of an ocean, I set out to do some Eleuthera explorations.

Eleuthera has the advantage of 2 coasts (east facing and west-facing), and a large bend at mid-island, allowing for multiple sun/shade options. This also allows the island to have favorable surf conditions even during the constant easterly trade winds. 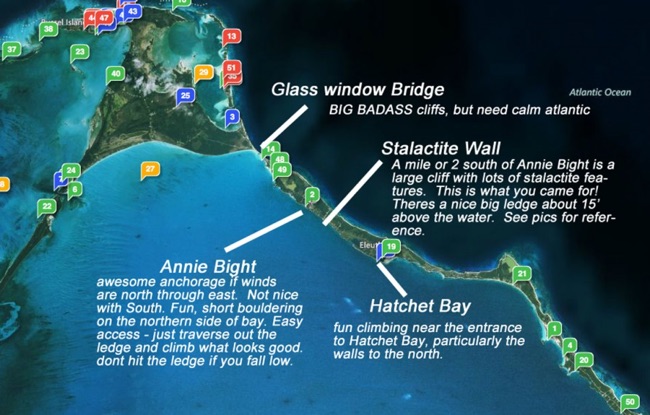 The best climbing is in the northern third of the island. On the east coast (Atlantic) are miles of 50 – 80′ cliffs similar to Mallorca.  The west coast has 10 – 50′ cliffs with the largest being just south of Gregory Town. The flat rock surface on the top of the cliffs is sharper than an army of razor blades, but the vertical and overhung walls are a perfect texture. Imagine Rifle, CO, but with the texture of Horsepens 40, AL.

GLASS WINDOW BRIDGE
The narrow joint of land where north Eleuthera pinches down into the skinny land mass that is the rest of the island is known as the Glass Window Bridge. The cliffs here are massive and steep. If you’ve seen media of the DWS in Mallorca, this is the Bahamian equivalent. Many caves and steep overhangs peper the cliff line. The easiest access (other than off the top) is at the bridge and a few hundred yards north of the bridge. You’ll want to wait for the seas to be somewhat calm for this area. Summer time would be a good time here as the ocean is usually flat and the cliffs are in full shade after 11am. 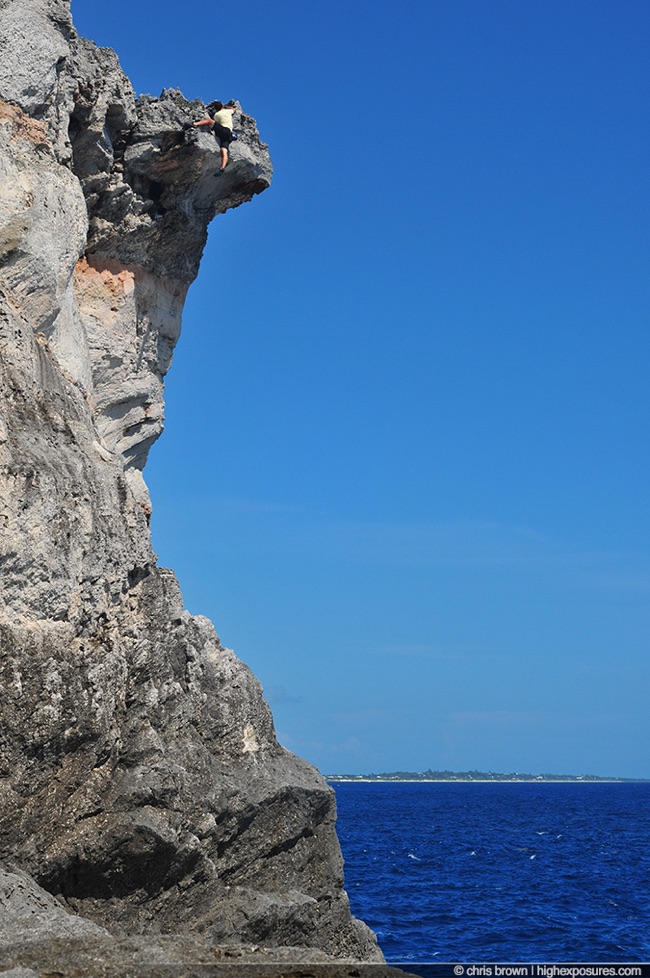 ANNIE BIGHT
3.5 miles south of the Glass Window you’ll find the quaint village of Gregory Town. At the north edge of town, a dirt road near a cell tower leads east to the beautiful cove of Annie Bight. This cove has a few cottages along the beach, some of which are vacation rentals, and fun bouldering on a short but steep cliff. The snorkeling along the southern cliffs in this cove is excellent.  Many lobsters are just waiting to jump in your belly. 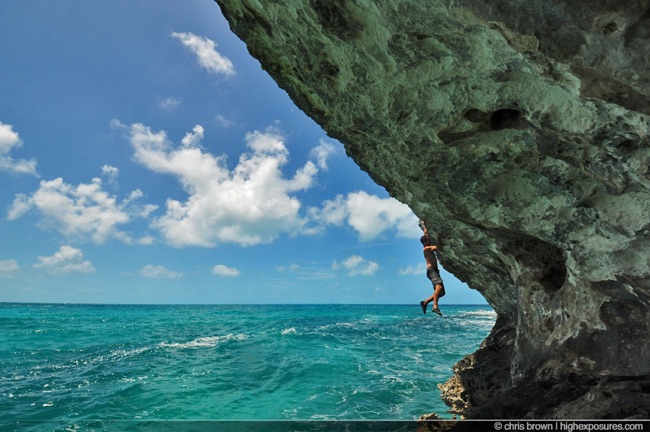 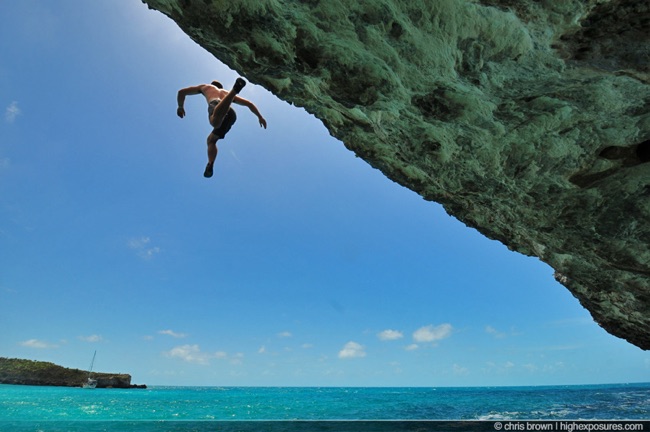 STALACTITE WALL
A mile and a half south of Annie Bight/Gregory Town lies the crown jewel of Eleuthera climbing. This wall has numerous stalactite features snaking their way down from the top of the cliff. The central pillar tops out at “only” 5.11ish, but the crux is at the top of the route. A nice ledge connects the various features at about 15′ above the water. 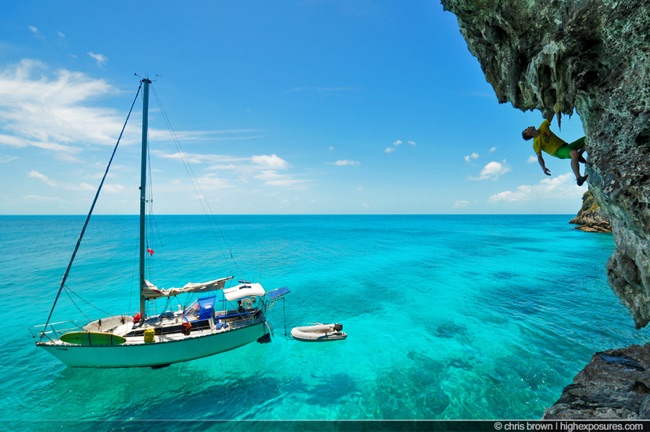 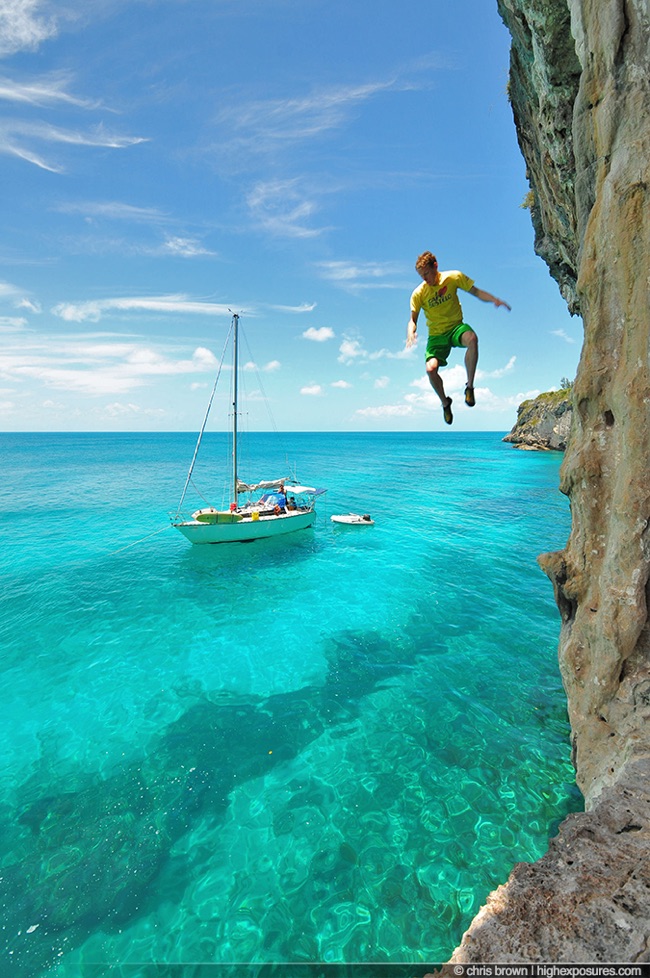 HATCHET BAY
South of Gregory Town by about four miles is Alice Town and Hatchet Bay. Hatchet Bay is basically a lake that was opened to the Caribbean when a cut was made through the cliffs. The climbing here lies just outside the cut, so you’ll need a boat to access it. Most of the best stuff is just north of the cut. From Hatchet Bay, a mile walk to the Atlantic brings you to the amazing surf break known as “Shark Pit.”  Back in the 70′s and 80′s a poultry farm in operation near here used to dump the carcasses into the water.  All of the locals used to show up at feeding time to watch the sharks devour the leftovers. The plant closed many years ago and sharks are no longer an issue. The wave here is perfect and breaks over a smooth rock bottom. A little walk south on the beach will bring you to a slightly friendlier beach break. 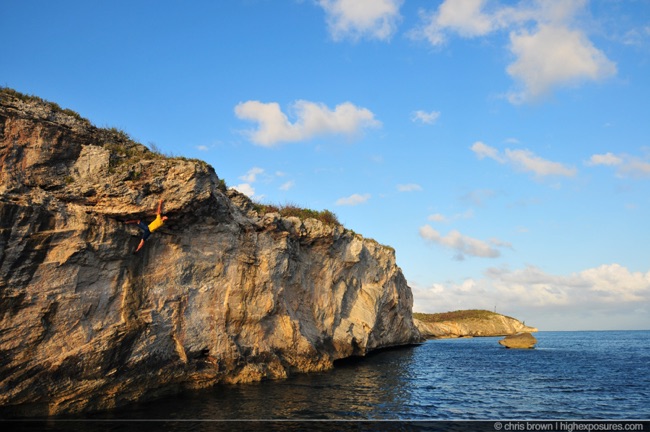 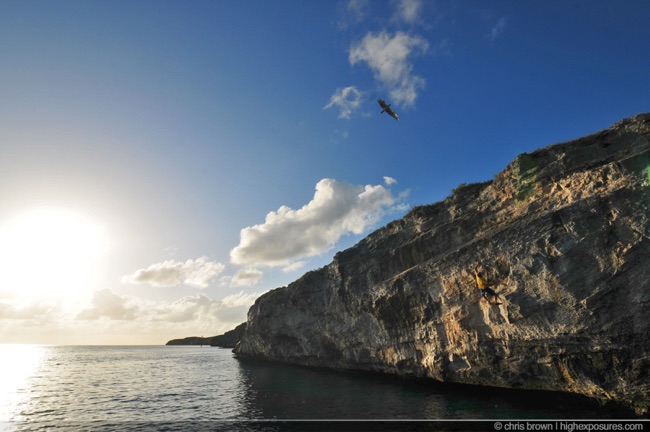 Chris, thank you for being a part of The Experience.
To see more of Chris’ rock climbing experiences visit his blog High Exposures.