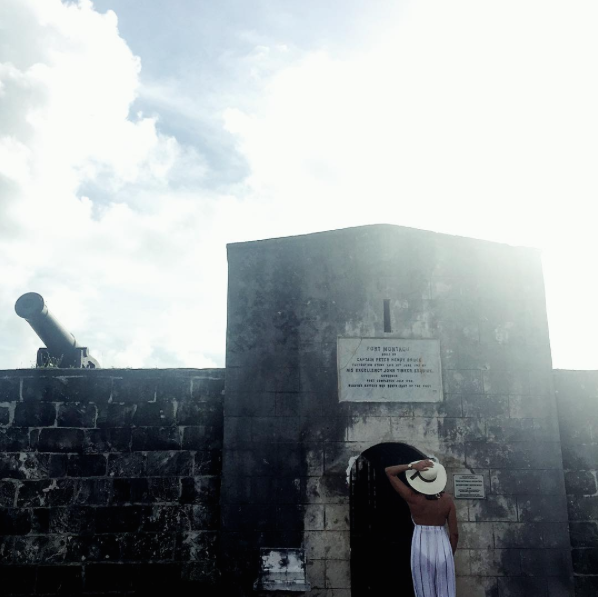 On the weekends, when our schedules slightly slow, Chris and I like to jump in his Wrangler and head East. Our destination: Montagu, a pull-off-point located on the north-east corner of New Providence, near a road that suddenly swings south. Our mission: breakfast, specifically tuna and grits, a favourite among Bahamian road-side fare.

It was during a recent Saturday saunter along such a road, in response to rumbling bellies, that we sat in the shadow of Fort Montagu with filled forks in hand. The fort, which was built in 1742, is the oldest of its kind to still stand on New Providence, the capital of The Bahamas. Constructed of the same limestone used to erect the Hog Island Light on the opposing end of the harbour, the fort commands the East entrance to the natural waterway which divides Nassau and Paradise Island.

Traipsing the four corners of the square-shaped stronghold, I recall the written word of Peter Henry Bruce, the Chief Engineer in charge of fortifying the Bahama Islands in the mid-eighteenth century,

“All the stone on this and the adjacent islands is of so soft a nature, when raised from the quarries, that we could cut and shape them in any form with very little labour; and after they have been some time exposed in the open air, they turn hard as flint, with this excellent property, that in firing into the walls, that ball lodges as in a mud wall, without making the least breach.” (Historic Forts of Nassau, pp.8)

Though, this theory was never truly tested. History speaks of two successful surrenders, both takeovers met by little opposition from an island that then belonged to the crown.

Fast forward more than 250 years later, should the fort be open to the public, travelers and locals alike would tour a terraced cistern, barracks for officers and soldiers, a guard room, and a bomb proof powder magazine. But sadly given it’s not, I’d recommend sitting or swimming in the presence of the stalwart structure. On any given day there are various vendors peddling local libations in its presence, and beaches bare of many bodies.