A continuation of Part One. Although I must warn you a few of these titles, given their storylines, are likely to encourage you to live by Island Company’s motto – “Quit Your Job. Buy A Ticket. Get A Tan. Fall In Love. Never Return.”

Therefore best to read with caution to the wind, no? 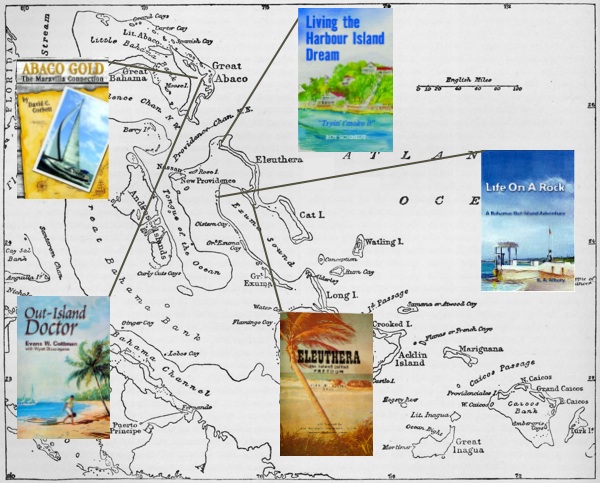 Living the Harbour Island Dream by Roy Schimdt
Island In Focus – Harbour Island, Eleuthera
Synopsis –  Roy Schmidt grew up on Long Island, NY. His father owned a successful heating equipment business based in NYC. After college, he reluctantly followed the easy path into his father’s business, all the while feeling it was the wrong choice. He married, had two daughters, and daily fought the dreaded traffic in and out of NYC. After his father’s early death, he rose to the position of co-manager of the company, but he still couldn’t find the fulfillment he sought. His desire to escape the daily grind came to a head on an unplanned weekend trip to the Bahamas, specifically Harbour Island. Though Roy’s idea of island life was the Caribbean, given his recent divorce he welcomed the trip as a pleasant diversion. But Harbour Island’s beauty and charm took him by surprise. After 14 empty years in the heating equipment business, suddenly his dream of island life now confronted him. Before the weekend was over, he decided to stay, and began the process of purchasing the property where he would open a small resort hotel. Ahead lay 18 years of challenge, change, romance, triumph, heartbreak, and rebirth. – Newswire.com
Availability –  Amazon / Kindle / Barnes & Noble

Life on A Rock – A Bahamas Out-Island Adventure by K.A. Albury
Island In Focus – Highbourne Cay, Exumas
Synopsis – Kate lived on Highborne Cay, Exuma, in the Bahamas for five years. Most people think it would be a vacation paradise to live and work on a small island, away from the stress and confusion of everyday life. This book will tell otherwise. It is the true story of a woman who learned about courage, fortitude and patience as she continually faced extraordinary and often dangerous situations in a place that had no doctor, no police nor other emergency personnel. Her everyday experiences in an isolated surrounding provide excitement and give a fresh and thought-provoking view of unusual events that were part of her life on this tiny, unprotected island in the Caribbean. From an armed robbery, drug traders and illegal immigrants, to medical mishaps and disasters at sea, Kate learned in those short five years that she and her husband, Peter, would be forced to step forward to protect the island and its people. In their jobs, they would need to cope–or quit. – Amazon.com
Availability –  Amazon / Kindle / Barnes & Noble

Eleuthera: The Island Called Freedom by Everild Young
Island In Focus – Eleuthera
Synopsis – An in-depth look in to the history of the 110 mile long island.
Availability – Amazon

Out Island Doctor by Evans W. Cottman with Wyatt Blassingame
Island In Focus – Marsh Harbour, Abaco
Synopsis – Out Island Doctor is living proof that a man can change his life in mid-course. It is one of the most unusual and enduring biographies ever written…the colorful story of a middle-aged man who left the security of a small Midwestern town to carve out for himself a new and adventurous life in the exotic Bahama Islands. – Amazon.com
Availability – Amazon

Abaco Gold: The Maravilla Connection by David C. Corbett
Island In Focus – Abaco
Synopsis – In 1656, a Spanish ship sinks under less than usual circumstances, and certainly not where treasure hunters of today expect. Where is the final resting place of the Maravilla, along with the gold, silver, and emeralds her hold contains? A Florida antique dealer, Ted Brewer, quite by accident finds a sketch with the necessary clues to the old ship’s location. Unfortunately for him there is another who realizes Brewer is holding the key to a vast fortune, and is willing to brutalize and kill him for that information. Brewer, however, has insured the safety of his secret by sending half the sketch to his sister, Jennifer, and the remaining half to his old and trusted Marine Corps buddy, Jake Bottom. Jake, since his retirement from the Corps, has become an expatriated American, living on a houseboat in the Bahamas. His biggest problem, on any given day, is whether or not to leave his hammock and go sailing on his forty-one foot sloop, or just swing in his hammock out of the sun. Jake and Jennifer team up to solve the mystery of the two halves of the map and along with a reprobate friend of his, Mike Flynn, the three sail in search of riches. Cortez, a Columbian drug lord, has killed once for the sketch, and is not hesitant to do so again. With dogged determination, he hunts the three, as they attempt to keep him blind to their actions. No matter their precautions, Jennifer is nonetheless kidnapped by Cortez and taken prisoner aboard his luxurious yacht. Jake, who has become completely infatuated with his recent lady companion, and Flynn must somehow retrieve Jennifer, yet not lose their claim to the fortune awaiting them. The plan is complex. Using every bit of his sailing skills, and along with Flynn’s expertise with demolitions, the two leap into the breech with little real chance of complete success.
Availability – Amazon / Kindle