I remember vacationing in Italy many summers ago and hurriedly reading through Dan Brown’s Angels & Demons with hopes that I would arrive to the limits of Vatican City with a sense of place in tow – a feeling of connection to the people, culture, architecture and monuments. Needless to say I did and ever since I have packed for each vacation with a work of fiction or non-fiction relating to my final destination. All that to be said, with summer quickly on the approach – less than a month to go – I figured it time to curate an island-specific summer reading list, so you too can gain a sense of place, even before the plane makes its initial descent for one of the Bahama islands.

Tell me which island are you headed to this summer? 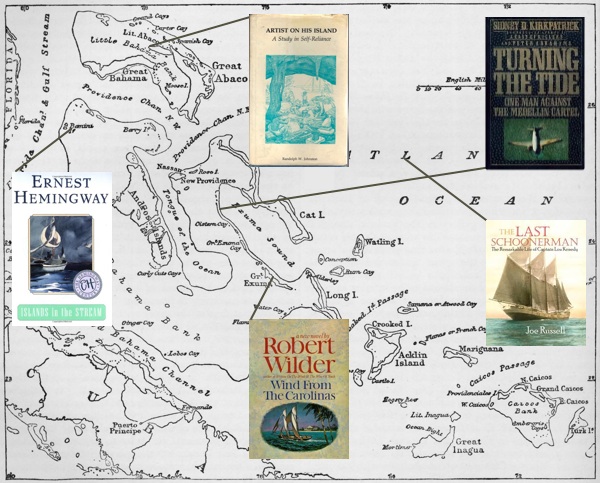 Islands In The Stream by Ernest Hemingway
Island In Focus – Bimini
Synopsis – First published in 1970, nine years after Ernest Hemingway’s death, Islands in the Stream is the story of an artist and adventurer — a man much like Hemingway himself. Rich with the uncanny sense of life and action characteristic of his writing — from his earliest stories (In Our Time) to his last novella (The Old Man and the Sea) — this compelling novel contains both the warmth of recollection that inspired A Moveable Feast and a rare glimpse of Hemingway’s rich and relaxed sense of humor, which enlivens scene after scene. Beginning in the 1930s, Islands in the Stream follows the fortunes of Thomas Hudson from his experiences as a painter on the Gulf Stream island of Bimini, where his loneliness is broken by the vacation visit of his three young sons, to his antisubmarine activities off the coast of Cuba during World War II. The greater part of the story takes place in a Havana bar, where a wildly diverse cast of characters — including an aging prostitute who stands out as one of Hemingway’s most vivid creations — engages in incomparably rich dialogue. A brilliant portrait of the inner life of a complex and endlessly intriguing man, Islands in the Stream is Hemingway at his mature best. – Amazon.com
Availability – Amazon.com / iBookstore / Kindle / Barnes & Noble

Artist On His Island: A Study in Self-Reliance by Randolph W. Johnston and assisted by Denny Johnston
Island In Focus – Little Harbour, The Abacos
Synopsis – Randolph Johnston is an artist who dreamed of finding his own tropical island – an island on which he might bring up his children and work in peaceful, beautiful surroundings, undisturbed by the high-pressure battles of modern life and uncorrupted by its materialism. But unlike many armchair travelers, Randolph Johnston made his dream come true…Randolph kept a diary which he dubbed “The Escapist’s Notebook,” or “The Good Life for Those Who Can Take It.” In it, he described their arrival at Man-O-War Cay in January, 1951, and the many events that followed. Excerpts from the diary – highlighting adventures, misadventures, trials, and triumphs – form the core of Artist on His Island, the autobiography of a most remarkable man. – Robert Noyes
Availability – Amazon / Barnes & Noble

Turning The Tide: One Man Against The Medellin Cartel by Sidney D. Kirkpatrick
Island In Focus – Norman’s Cay, The Exumas
Synopsis – Carlos Lehder Rivas, kingpin of Colombia’s most murderous cocaine empire. A powerful international businessman and self-proclaimed revolutionary. He made the mistake that would end his career: He invited an American professor to be his guest on the island of Norman’s Cay… Richard Novak, father of five and lover of the sea, came to Norman’s Cay to study the hammer-head shark up close. But the college professor soon found himself locked in combat with a global archcriminal who had stared down the police agencies of major superpowers… Norman’s Cay, island paradise of the Bahamas, that, thanks to Carlos Lehder, became the nerve center of the Medellin Cartel, complete with gun towers and a DC-3 landing strip. Here is the amazing true story of how Richard Novak helped bring Lehder to his downfall-armed only with a .357 Magnum, his underwater sabotage skills, and the lone courage of his convictions. – Amazon.com
Availability – Amazon.com / Kindle / Barnes & Noble

The Last Schoonerman – The Remarkable Life of Lou Kennedy by Joe Russell
Synopsis – This is the page-turning story of a man who walked out of college, went to sea, and lived life on his own terms. From the 1920s until the 1980s, Captain Kenedy mastered ships delivering cargo while supporting a family and doing what was necessary as he sailed up and down the eastern seaboard of North America from Nova Scotia to the Caribbean. The incredible life of Captain Lou Kenedy was framed by the 10 vessels he owned and skippered. Preferring sail to engine power, even after the middle of the twentieth century, he made a profit hauling cargo between the Caribbean, Canada, and the northeastern United States. He lost vessels in raging hurricanes and once at the hands of a German U-boat captain during World War II. He was there during the Cuban Camarioca Boat Lift, and also chartered vessels for use in motion pictures. Through it all, Lou Kenedy’s character was shaped by the hard necessities of the way of life he’d chosen, but tempered by great humor and an unsinkable zest for life. While this can certainly be termed a “nautical book,” the casual observer may make the mistake of identifying The Last Schoonerman as a book only for those interested in boating and the sea. And while it is true that ships and the sea are the backdrop upon which this story is painted, the book is actually the account of the life and times of an incredibly interesting and multi-dimensional man. It doesn’t take long for the reader to realize that Captain Kenedy was a unique and masterful problem solver. This characteristic, combined with his intriguing personality and the independent lifestyle he chose, created the opportunity for a talented writer to put it all together in a compelling narrative that merits the reading time of people of all stripes. This combination is what keeps the reader engaged page after page, asking “What will happen next? And what will Lou Kenedy do about it?” The Last Schoonerman is a book worth reading and a book both landlubbers and sailors will certainly find interesting, educational, and above all, enjoyable. – Amazon.com
Availability –  Amazon.com / Kindle / Barnes & Noble

Wind From The Carolinas by Robert Wilder
Island In Focus – Great Exuma
Synopsis – Set against the exotic background of the Bahama Islands, Wind From The Carolinas is the saga of wealthy, aristocratic families from the Carolinas, Georgia and Virginia who fled the South after the American Revolution for the exotic Bahama Islands, remaining loyal to England. Abandoning their plantations for the islands, they established new dynasties in the Bahamas, where the Crown rewarded their loyalty with huge grants of land. – Robert Wilder
Availability – Amazon.com / Barnes & Noble