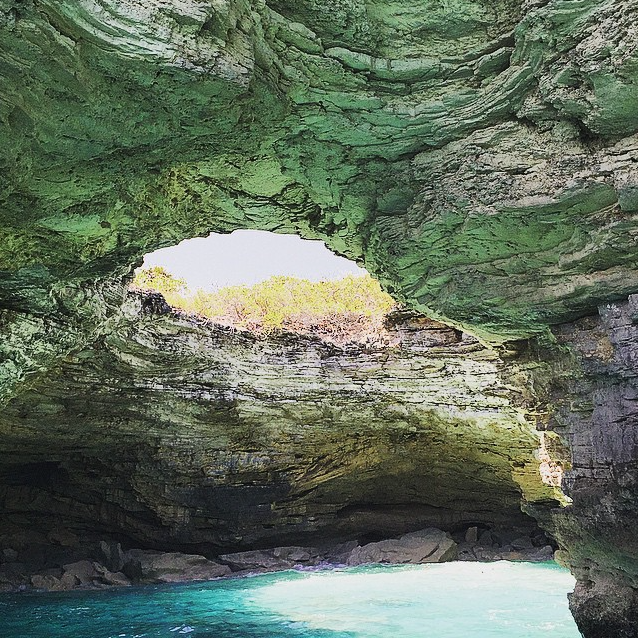 Words that line the hull of the boat, but in stark contradiction to what I’m feeling; what between the wind which mirrors the tantrum of a small child, and the boat itself which boasts a flat bottom better suited for calm coves, not wave crashing seas.

The only variables marginally under my control are: the sun, which I need in the east so as to catch the ideal shot, the tide, which I need to be low, and the captain of the boat, Gelbert Smith, who given my complimentary musings on his age and physique I feel is snug beneath my finger.

Then, no more than a few minutes in to our departure from a crescent cove I come to find it’s really he, not I, that’s in control. Skillfully navigating a network of exposed coral heads, Gelbert’s boat narrowly kisses a shore lined with honeycomb limestone. Leaving in our wake a labyrinth of frothed sea we arrive to the north-eastern coastline of Long Island. It’s here, no more than sixty feet below the Columbus Monument etched in dedication to the Lucayans, that Captain Gelbert expertly guides the boat in to one ocean cave after another. The final being an open-top cave.

With light pooling and reflecting at its base I admire a small beach that was once situated here. Sadly a victim to the endless waves and a trampolining sea, it now lay covered in broken limestone. I think to a time in history when the Lucayan tribe, a gentle people, would have occupied this cave and the miles of scenic land.

I ask myself,
“Did the men spearfish with wooden poles and fish-bone fixed ends just off the beach here?”
“Did the women spend a moment, or a better part of the day catching shade here?”
“Did the children leap into the water as the echoes of laughter danced along the walls here?”

I then think to Columbus, who much like the falling rocks and relentless sea washed away their footprints but not their spirits. For their peaceful spirits continue to be felt in the majestic beauty that is Long Island.