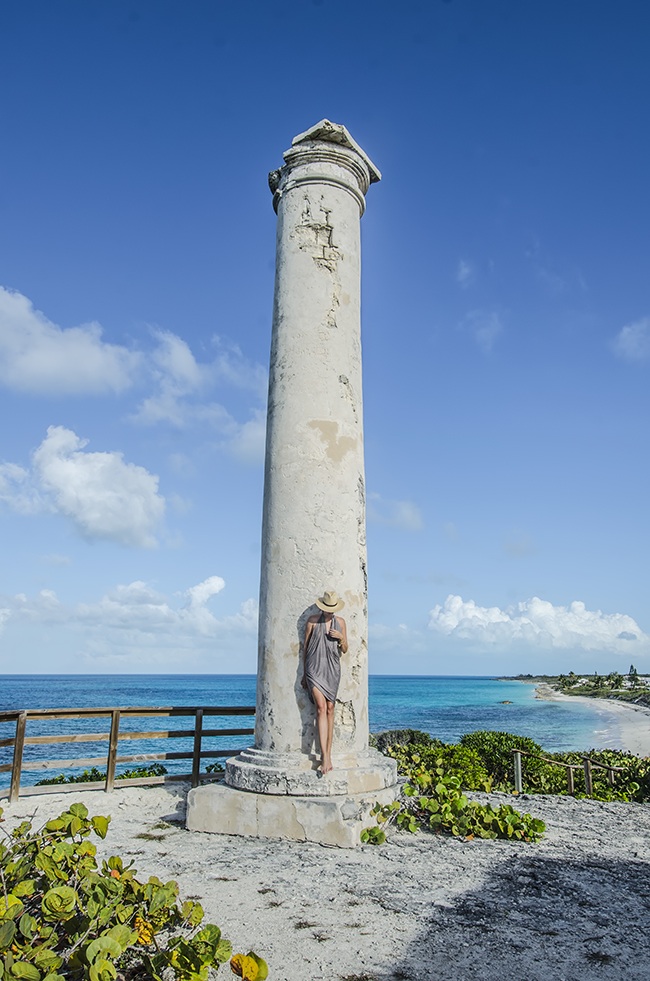 In order to experience the historic grandeur of the Williams Town Salt Beacon, by land, one needs to head south and cross a teeny-tiny-one-lane-bridge that connects Little Exuma to its greater counterpart. A byway that speaks to the pace of island life, as do the fishermen who can be found reeling in their catch on the narrow width of the bridge, on a work day, during work hours no less.

Arriving to the more than 200 year old landmark, the smell of brine competes with the fragrance sweeping off the sea, a natural medley of scents given the Tuscan column overlooks Exuma Sound and the “Great Salina” of Williams Town. Standing just as I did at the base of the Salt Monument on nearby Stocking Island, I think of the reason for constructing the thirty-foot-marker during the loyalist era. Then, in those years, it serving as an unlit lighthouse which guided countless ships to its shores, once anchored their hollow hulls being filled with salt harvested from the three ponds found on Little Exuma. In speaking with a weathered old salty sea dog about the history surrounding the base of the column, a history as impressive as the 360-degree view that can be seen from its circumference, I learn that one annual harvest was recorded to be as high as 300,000 bushels and as many as sixty schooners made up the salt fleet. Looking up and down the length of Little Exuma and then out to sea, I paint on the horizon a fleet flanked by armed vessels anxiously awaiting an attack by pirates or the Spanish, and decide for such a small island it is certainly home to a history far greater in size.