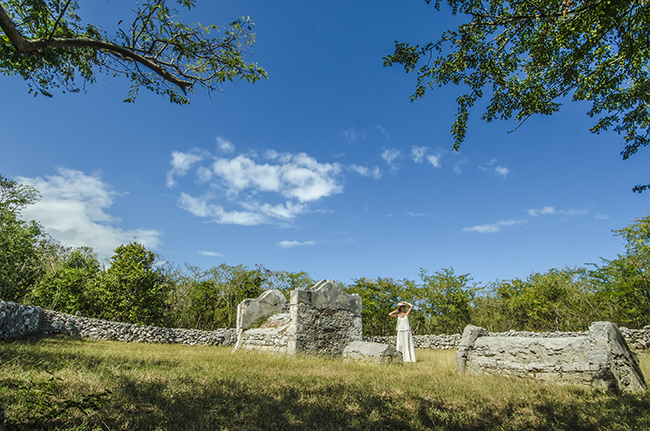 Before a traveller explores The Exumas, or The Bahamas even, I implore them to read Wind From The Carolinas. A novel that follows several generations of Camerons, an aristocratic family – who much like my own – fled the South in the wake of the American Revolution to rebuild their lives in the Bahama Islands. An archipelago they hoped would yield enough crops to make up for their more Northern misfortunes. While the novel is a work of fiction, it was undoubtedly inspired by families such as Loyalist Captain Alexander McKay. Who in the end of the 18th century was granted acreage on the island of Great Exuma by the British Government in restitution for his property losses in North Carolina.

The land of which I stand on here, in this picture, was not his own, but one he oversaw. And in the end his final resting place. With the wind sweeping through my hair, and the sun warming my skin I had to question: was this a final wish granted by his dear friend and landowner Squire Denys Rolle? To be laid to rest alongside his wife, Ann Mckay, who died in childbirth in 1792, two years before his own death? For he, like many loyalists of such a time eventually sunk to his knees. For his land did not yield and at whit’s end he was forced to sell it off, piece by piece.

However, for this I know. The Bahamas was and still is, in many ways, not a paradise for the weary at heart. But the Bahamas is the country where I wish to be buried.