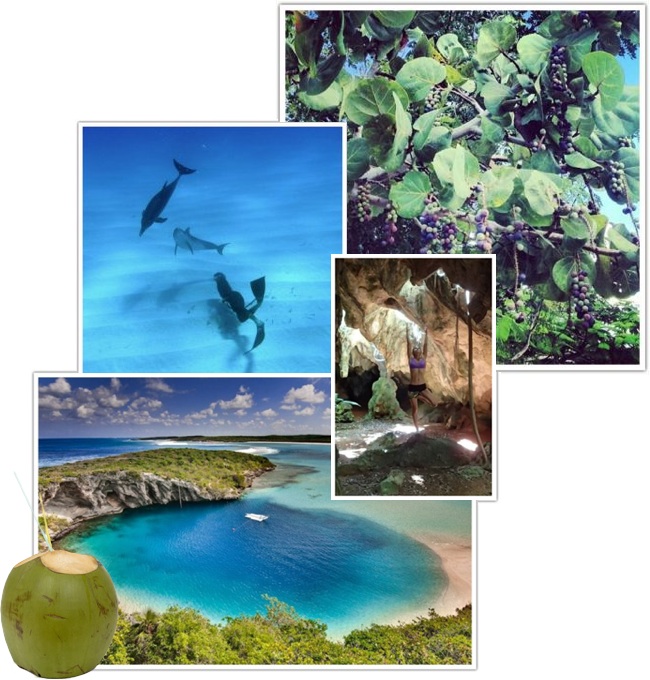 Husband and wife athletic-duo William and Brittany Trubridge share their insider’s tips on must-visit spots on Long Island in The Bahamas. An island they call home when not teaching in far flung corners of the world.

BRITTA – You really need to be able to let go of a lot. There’s a lot of simple pleasures you take for granted in America – or other more developed countries – that you just don’t have here. You really need to know how to get by – grow a garden, spear fish, catch rain water etc. You also need to be comfortable with spending a lot of time outside. The outdoors are just as much a part of your home as the indoors are. If you don’t get out and enjoy nature you’ll go crazy here.

WILLIAM – You have to be easy going and comfortable with your own company.  It’s not a tourist-packed party island, but what it does offer will enrich you so much more.  The island people are warm and genuine, so you need those attributes yourself to fit into the community.

BRITTA – is at my Grandmother’s, Joyce Beede’s shell art in Salt Pond. Also, Mahalia Cartwright makes gorgeous sea glass jewelry, which can be found at Under The Sun. And of course, Ena Major’s Creations in Clarence Town, she has gorgeous platted accessories and home goods.

WILLIAM – All of the above.

BRITTA – I haven’t been to them all yet but I was blown away by Hamilton’s. It is huge, full of little bats and even some crystals. Roots drip down from trees overhead and light trickles in so beautifully through the ceiling crevices. There are even a few fresh water holes that you can drink from in the cave.

WILLIAM – The cave behind the church ruin in Gray’s Settlement. It has a lake inside that contains pink shrimp and blind cave fish, a species found only in the Bahamas.

WILLIAM – The churches in Clarence Town.

BRITTA – There is also a church in The Bight that is the oldest church in the Bahamas – it’s amazing to see.

BRITTA – I try to go to the Blue Hole as often as possible. Whether to dive, do yoga, walk or just to sunbathe.

BRITTA – Winter Haven. They have fancy, fun drinks and the sun sets over the sea right behind the restaurant.

BRITTA – You have to go to the beach at low tide. It’s the best.

WILLIAM – Where Lovers Beach can be found in Dean’s Blue Hole, and how to find the mysterious blue holes close to Salt Pond Harbour.

WILLIAM – Mayhem!  The races are a real spectator sport, especially if you have a boat, and the entertainment on shore is great fun!

Thank you Britta + William for being a part of The Experience.

Clockwise from lower left: How Britta starts each day, drinking the fresh water of a coconut cracked by William; William diving alongside dolphins in Bimini, photographed by Dolphin Expeditions; One of six seagrape trees in William and Britta’s backyard; Britta teaching yoga in Hamilton’s Cave during Caribbean Yoga Retreats; Dean’s Blue Hole via here.