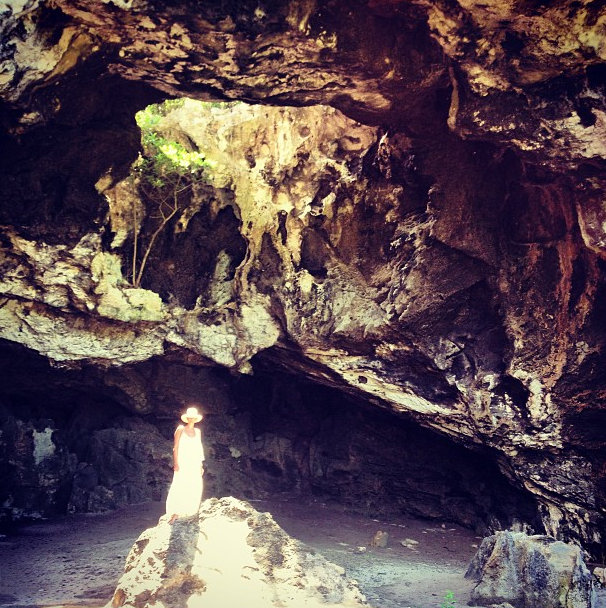 There will come a day, sooner rather than later my mum hopes, when the pitter patter of little feet is heard scurrying across wooden floor-boards, and the speed at which we navigate the islands will suddenly need to slow. Lately it’s a change we’ve thought about more often than not, especially now that we call the island of Eleuthera our second home. At 110 miles long, a stretch in comparison to our 21 mile capital outpost, I wonder, how ever will we get our child to sit still for so long and what bribe will need to be cleverly bartered?

In those first, formative years, I look forward to nurturing our child’s curiosity. With that in mind, comparing Hatchet Bay Cave and Preacher’s Cave, the drive to the latter is a longer one, but the landmark destination is better suited for a child’s feet that have yet to find a confident hold. That, and Preacher’s Cave is an open-top cave, whereas Hatchet Bay is a deep, dark, underground cavern. Regardless, both possess an equal abundance of history deserving of being told.

I imagine upon our arrival to Preacher’s Cave I would speak of Captain William Sayle’s quest for religious freedom, and his ship which had felt its way south from Bermuda to the Bahamas with a small six ton shallop fastened by a rope to its stern. In a theatrical tone I would talk of once calm weather that suddenly kicked up in tune with the tantrum of a small child, of sideways rain and bouncing seas that resulted in the ship wrecking on the jagged teeth of the Devil’s Backbone, a reef not far from shore. With the detailed sweep of a brush I’d paint the picture of the crews exhausted crawl to shore. I would carefully explain that they were not met by natives, as two centuries before Sayle’s arrival Columbus had stripped the islands of the original people. I would also leave out the bit about the Lucayan Indian body that had recently been discovered, beheaded and buried face down. Inside, I would point to a rope that when climbed leads to a blue hole at the rear, and the placard that reads “William Sayle shipwrecked at Devil Backbone found refuge here. Sermons held 100 years”. Crooking our necks we would look up to the holes which allow light to pool through, and let our imaginations run wild with thoughts of them being used as shower heads on rainy days. Finally, we would climb the carved stone steps to what was rumored to be a pulpit and grooves that once held a bible.

Afterwards we’d retreat to the nearby pink-sand Tay Bay Beach to fulfill the promise of once frozen popsicles.