Warning: "continue" targeting switch is equivalent to "break". Did you mean to use "continue 2"? in /nfs/c12/h06/mnt/220128/domains/700islands.com/html/wp-includes/pomo/plural-forms.php on line 210
 700 Islands » Eleuthera’s Mysterious Rock Formations 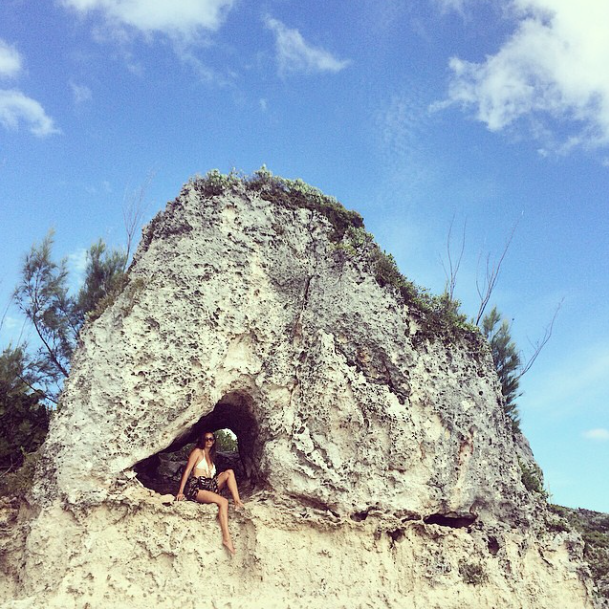 As we headed to the Cove Eleuthera in celebration of our first year of marriage I was reminded of a story surrounding Chris’s real love. His red wrangler jeep.

Traveling north along the Queen’s Highway, a main thoroughfare which stretches as though a child has run their finger along the length of the island and cleared the way, we pass over the Glass Window Bridge. No sooner have I breathed a sigh of relief Chris abruptly slams on the brakes. Eyeing me and the western edge of the road suspiciously, a devilish smirk crawls across his face, “I’m going to do it.” he says excitedly. Not risking a moment on hesitation on my part he turns the wheel to a hard left, sending us expertly down a 100 foot incline. Mixed with the sounds of nervous laughter, the brush of gears and the crunch of rock meeting rubber, we arrive safely to the bottom.

Nearing the edge of the Great Bahama Bank, our eyes fix on a massive rock formation and almost in tune we ask, “Did you know this was here?” In hindsight it’s not a surprising find really, given the 110 mile island is home to many mysterious rock formations; including one that had inspired a famous painter, and another which provided shelter for Captain William Sayle and the first Eleutheran settlers who seeked refuge after his ship was wrecked on the Devil’s Back Bone in 1640.

Leaving what could very well be the scene of highly-staged car commercial to our backs, I climb the boulder. My feet finding hold in the honeycomb rock I carefully propel myself in to a crevice large enough to provide shelter from a storm. Looking to Chris and then to his jeep I chuckle for his real love truly draws out our desire for adventure, together.

P.S. Where to find this mystery landmark on a map.
P.P.S. If anyone knows the story behind this rock, please share it in the comments below.