I love to experience the islands of The Bahamas through the eyes of another. To appreciate its varying depths and colour from a viewpoint that I cannot entirely call my own. To see it captured in a different light, noting how the sun casts a shadow in a way I’ve never took notice of before. This said, naturally my interest was caught and kept when I bestowed upon the trailer for Exuma, a short-film by award-winning photographer and filmmaker Colin Ruggiero. The the soon to be released film – which has already received critical acclaim from the 2014 Big Sky Documentary Film Festival – will be available for pre-release purchase on the 25th day of this month. Shot entirely in HD, using innovative underwater and time-lapse photography, the film promises to immerse the viewer’s senses. Ruggiero says of the film “through Susanna, the protagonist’s eyes, and her sparse first-person narration, we will be given a window into the colours, moods and stunning imagery of a water-world few people have ever seen. Welcome to Exuma.”

The subject is really Exuma the district rather than Great Exuma.  I went down to the Exumas to help a friend build a house.  I met a girl and ended up spending a lot of time there over the next several years.  When it comes to films, I don’t really give a lot of thought to practical concerns like budget, marketability, etc.  I’m like a kid with a butterfly net.  There’s all this beauty flying around everywhere and I just want to catch it and show it to people.  The Exumas are such a crazy, beautiful place, especially under the surface, and I got a little obsessed with free diving and filming the underwater world.   It wasn’t until after years of taking my camera diving every day and shooting time-lapses of the clouds that I decided I should try to make some sort of film out of all the images I’d collected and maybe recover some of the money that I’d been hemorrhaging .

A wilderness.  I enjoy being in any wilderness.  I like trying to tune into the natural rhythms of wild places and I like how these places put the rest of my life in to perspective.  All wilderness, but especially the ocean, has a way of making me feel small and humble and vulnerable to forces much bigger than myself.  I think that’s an important awareness to have.  And there’s something about holding your breath in particular – I’m not very good at it – that focuses me, and shuts off the other thoughts in my head, in a way that I seldom experience above the surface. 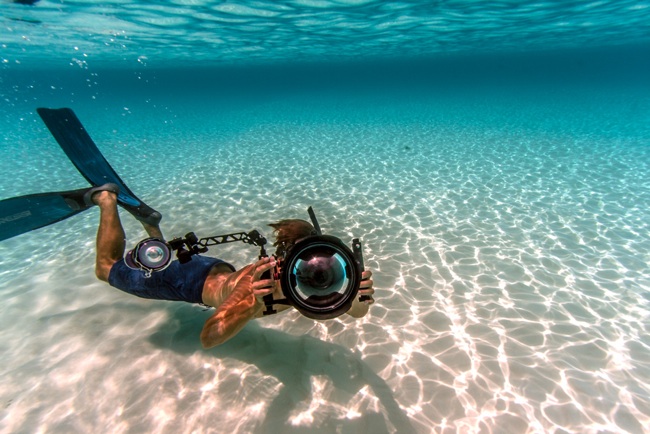 It’s a little bit of vindication. This film was made entirely by myself with no budget, crew or assistance.  In many ways, it wasn’t a very logical film to make. I had no budget to make it, largely because I wanted to retain complete creative control, and it has no compelling storyline or arc that is the first ingredient in most good filmmaking. I’m not very practical in my decisions regarding art.  I’m just compelled to capture something or express something and I throw myself into that.  But art happens in a much larger context and having the right connections and being in the right position to get your work seen is a big part of the puzzle.  Some people claim to make art just for themselves but I do it to show to other people.  Focusing too much on creating art and not enough on getting it out there, as I’m prone to do, can be disappointing.  Everything in our culture is so political, including photo competitions, but it’s nice to have something you’ve put so much work in to get recognized.

The Exumas are almost an alien environment.  In a way, people really shouldn’t be there.  I know that natives historically moved through the area but, really, those small cays are not very suitable for human inhabitants. There’s not much in the way of fresh water or trees or mammals or dirt to grow anything.  Without desalinating the water and bringing in food and fuel and electricity from the outside, people really couldn’t be there at all.  So it offers a different and surreal place to make a film.  That and an unrivaled palate of blues.

I’ve never been much of an early riser.  I know that’s not very camera-manly of me, and it means I miss a lot of beautiful light, but just before sunset is my favorite time to be filming in the Exumas.  It’s hard to pass up sitting on the beach and watching the beautiful clouds and sunsets that are the norm there but being in the water at that time is superb too. The light cuts at oblique angles through the water and the golden-orange light mixes with the blues in such amazing ways. 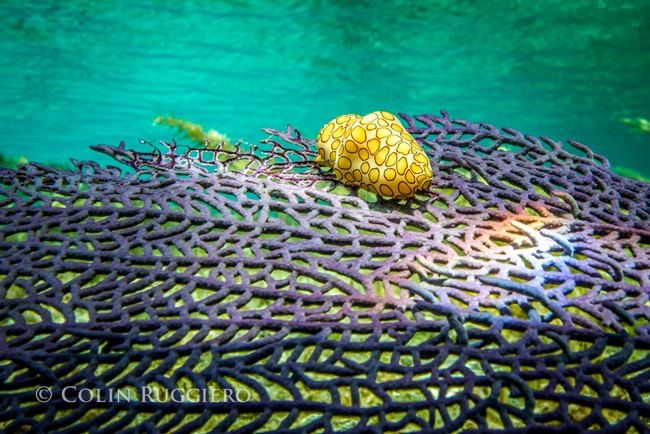 What the Exumas were like before so many people discovered them.  I’m not proud of the role I’m playing in that.  When I first went to the Exumas about 7 years ago, I could set up a time-lapse in Pipe Creek and have nothing but tide and clouds pass in front of my lens for the 4 or 5 hours it would take.  Now it’s difficult to point a camera in any direction for more than an hour without a jet ski blasting by.

I just can’t bring myself to call it by name.  But it’s on the ocean side of Pipe Creek.

Yes… Thunderball.  It’s not hidden or shrouded in mystery and intrigue but it really is awesome.

The Exuma Cays Land and Sea Park.  If I have to be more specific, I’d say Danger Reef.  There’s just simply more life there.  Big grouper, sharks, eagle rays, everything that is supposed to be there is there. The no-take zone helps keep things inside the park a little closer to what the Exumas should be.  The fish and lobster are bigger and more plentiful. National Parks, like the one proposed in San Salvador, as well as the numerous marine protected areas, are such an important thing for the Bahamas.  These places are sacred. 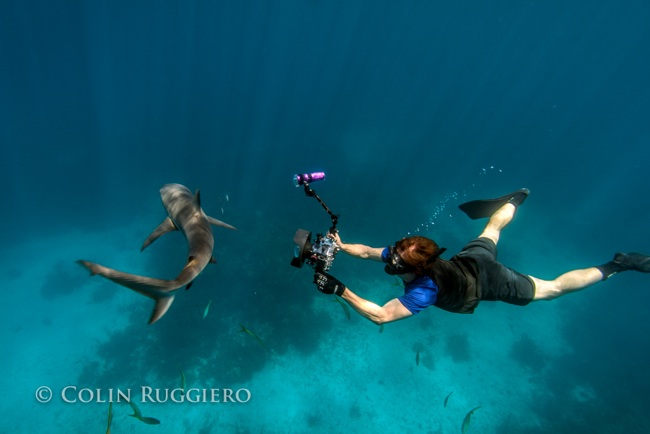 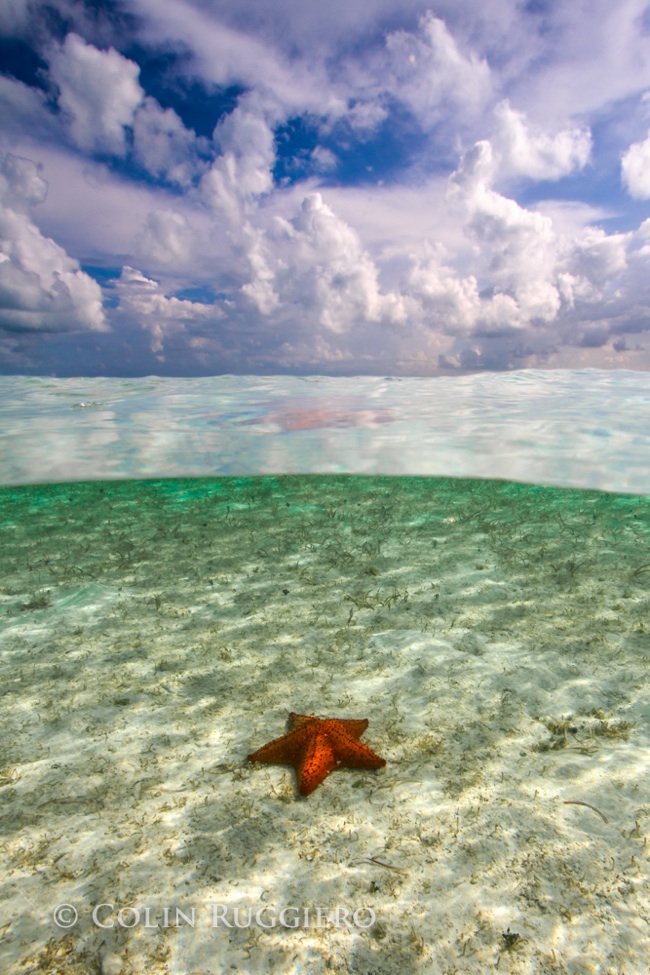 Every shade (of) blue 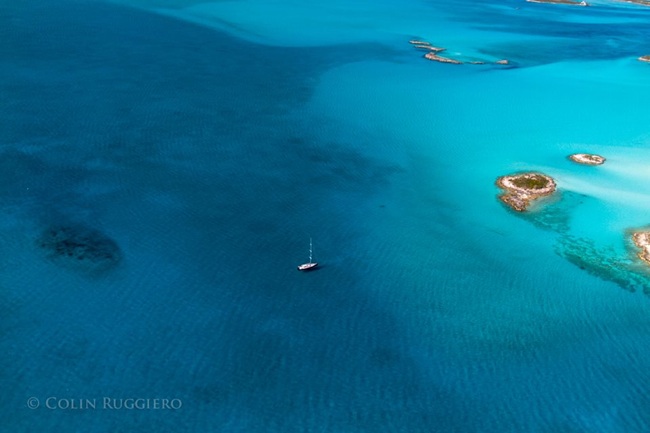 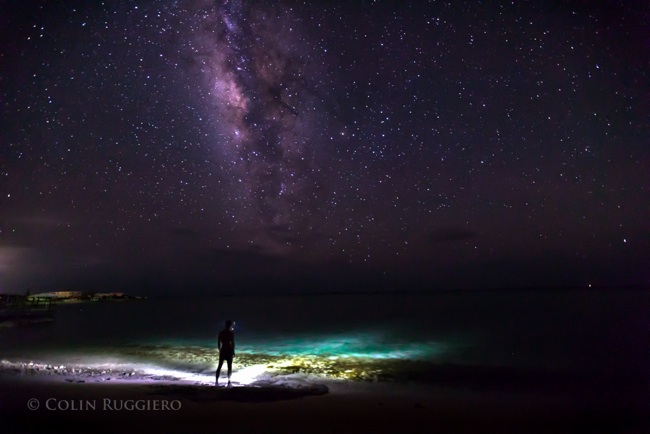 Specifically, probably Smidgen Cay.  It’s probably not called that anymore as it’s been bought and sold but, as the name implies, it’s a small, little piece of rock where somebody built a humble paradise.  Somehow, there was always a cold beer and a good friend there.  I always left Smidgen with the conclusion that it’s the simple things that fill us up.  And… the view is one in a million.

Thank you Colin for being a part of The Experience.